When a 7.2 magnitude earthquake struck southwest Haiti on August 14th, 2021, the international community rushed to send aid. But for three Union College alumni, simply sending supplies wasn’t enough. International Rescue and Relief graduates Janae Schumacher, Justin Dena and Lauren Lombard volunteered with Educáre, a Haitian-run organization, to bring medical help to those most affected by the disaster. Schumacher, a paramedic, assisted doctors with medical care, while Dena coordinated the mobilization of the team and other logistics from the ground in Haiti. Although Lombard was working remotely, she was able to bring her expertise in communication, organization and fundraising to assist Educáre’s efforts.

The medical team trekked into the rural mountains surrounding the epicenter of the quake where aid was most needed and least available. Schumacher said, “No one else went out there because if you went out, you had to hike into the mountains. One day we hiked almost eight miles with all our clinical supplies to set on a clinic up at the top of a mountain. Working with the local communities we were able to go to the areas with the most need. Our team answered the call despite the difficulties of accessing some of these areas. Our group went out and met the people where they were.”

Educáre was founded after the 2010 Haitian earthquake. Lombard went down to Haiti for seven weeks to assist with relief efforts and made many connections with the Haitians she served alongside. When they formed an organization to bring better education to children in the region, she joined the cause. Since then, Lombard has continued to volunteer with Educáre. She works at a non-profit she co-founded, We Nurish, that provides access to food in her community in Minnesota. Lombard introduced Dena to Educáre’s president, Jameson Leo, five years ago. Much of Dena’s work has been with Singing Rooster, an organization that provides support for small Haitian-owned coffee farms.

When the 2021 quake struck, Educáre pivoted to disaster relief to meet the current needs of the country. Dena contacted Schumacher, who he had met when their time in Union’s IRR program overlapped, and invited her to come join the team. Their travel plans were delayed by tropical storm Grace, which struck Haiti two days after the quake. However, they were able to join with the team of local Haitian doctors and begin holding emergency clinics within days of the disaster. “We were uniquely positioned in that we were a Haitian-run organization with Haitian volunteers,” Lombard shared. “Everyone except for the two Americans that joined was local. They spoke the language and they were very familiar with what the hazards were and how to respond to them. As an organization that is not just foreign aid coming in, we made an impact on the local community.”

Because the area the team was working in was so remote, they were still seeing wounds that had not been treated several weeks after the earthquake. “We did a lot of wound care,” said Schumacher. “That was my primary job; I did wound debridement. When I started, there were close to a week old injuries, and by the time I left, I was treating injuries that were three to four weeks old and had had no attention. We had to debride the wounds, clean them and make them so they could begin to heal.  Some we would give stitches, if they weren’t mangled too badly, and then we would give antibiotics.” A major concern for Educáre’s team was the scarcity of antibiotics. Many patients had horrible infections from their untreated wounds. Not only was the demand for antibiotics greater than the supply, but also transporting the stock that was available to where it was needed most was made difficult by the damaged infrastructure. Moving supplies into the Haitian mountains is always a challenge, and the earthquake and storm complicated matters by destroying parts of the road network, as well as disrupting cell towers. Dena said, “Because the towers were damaged, communication was very limited and unreliable, which made coordinating our relief efforts difficult.” Despite the challenges, Educáre treated over 1,700 patients at 12 different clinics. Working with HERO, an organization that provides medical flights, and the U.S. Coast Guard, they arranged the airlifting of eight of the most critically injured individuals to the Haitian capital of Port-au-Prince for hospitalization.

“Our first airlift was a five-year-old girl named Islande,” Lombard shared. “She had a brick fall on her head and split her head open. It started getting infected and then there was an aftershock, and a wall fell and hit her. It just completely split her head open. We were able to get her airlifted to the capital and get her into the best hospital in the country with the best neurosurgeon. It took several days to get her into surgery because they had to do a number of tests and labs and scans. In the process they discovered that she had a brain tumor. What is so incredible is that the tumor protected her from serious brain damage when the wall fell on her, and the wall falling on her is what allowed her tumor to be discovered and treated. She came through the surgery, and Educáre was committed to covering her medical expenses. However, it was covered by a grant for earthquake relief. She’s at home now and doing well, and Educáre will be helping her get to her followup visits. We feel that she’s been saved to do great things in the future. That’s the case with all the kids Educáre has been working with.”

Lombard said her Union education helped prepare her for the challenges of working in disaster relief. “I paired communication and international rescue and relief, which ended up being a really good combination,” Lombard said. “I didn’t anticipate using the things we studied later, but they directly informed things I ended up doing. The problem-solving aspects of how you handle a crisis … were definitely highlighted in the things we were studying and doing.” Dena found his passion for working with local organizations while studying in Nicaragua as a part of Union’s International Relief and Rescue Program. He said, “While I was there, I met Dr. Caldera, who sadly passed away while I was in Haiti. He was a local doctor who worked with Union to teach IRR students. He was a great inspiration to me and taught me so much about working with local organizations. His passing was very sad for the IRR community. It reminded me that I need to continue the work. I also learned a lot from the IRR response to Hurricane Harvey. Working in emergency management during that response helped prepare me and developed my skills.”

Although the Educáre team faced many difficulties, Dena, Lombard, and Schumacher wouldn’t have missed the opportunity for the world. Dena said, “Even though we were limited by unreliable transportation, poor communication channels and a lack of supplies, we were able to do quite a lot with a little.” Lombard summed up her experiences, saying, “Anytime you respond to a disaster, it’s inconvenient and exhausting and challenging, but you see the people you’re able to impact and each person makes it worthwhile all over again.” 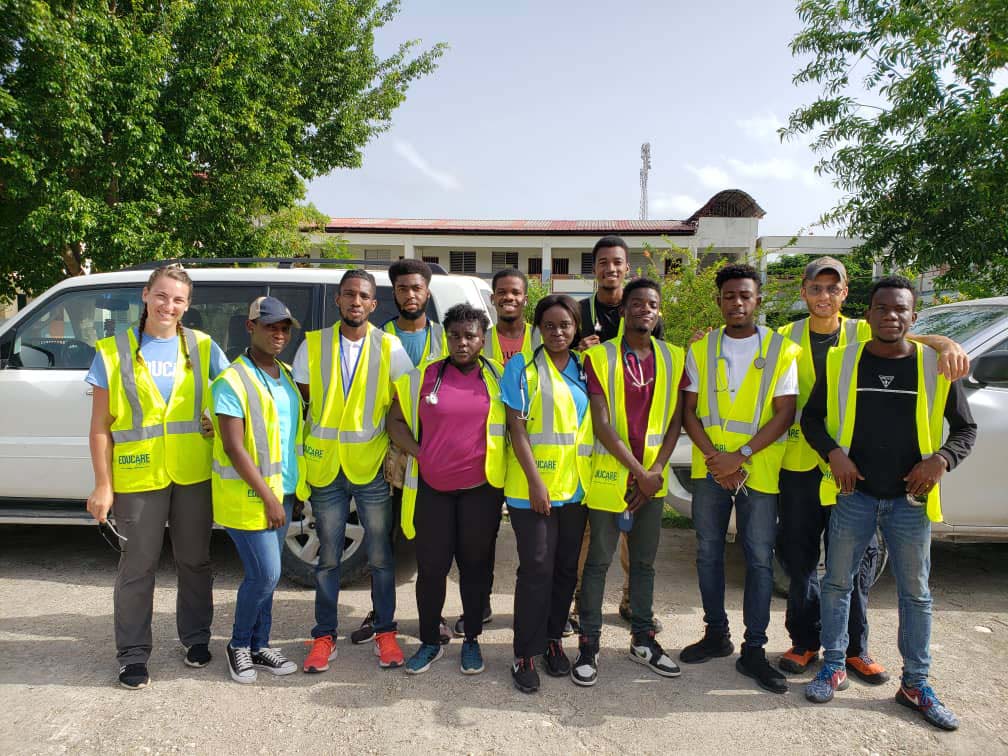 Photo of the Educáre team, including Dena and Schumacher 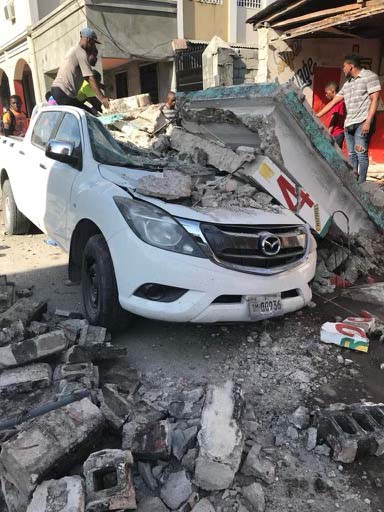 The earthquake caused widespread destruction throughout the country.

Dena and Schumacher assisted in a makeshift clinic in the mountains near the epicenter. 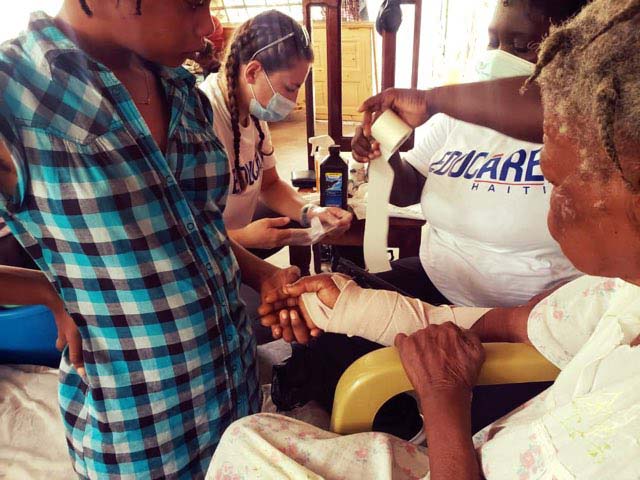 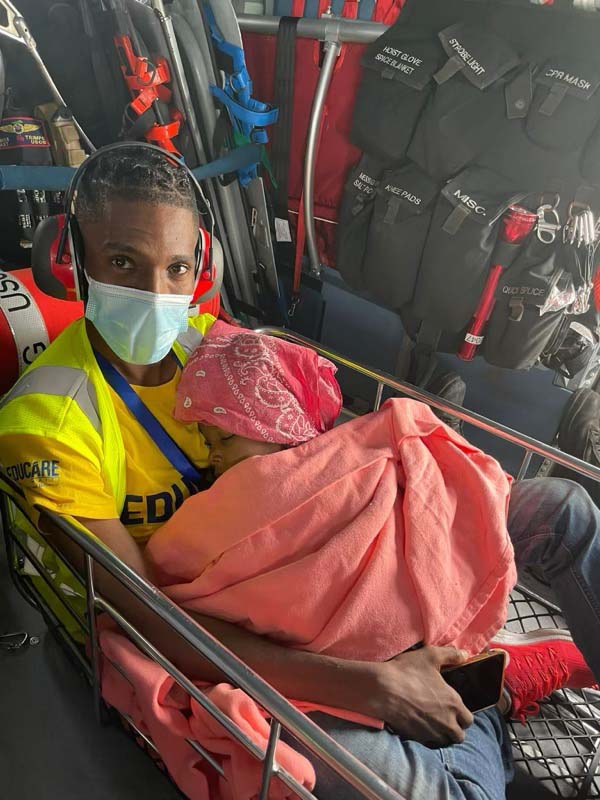 Schumacher works in the clinic.