On March 5 a new exhibit featuring the stories of thirty Union College alumni honored with golden cords opened in the library’s gallery.

Union College was founded during the heydey of American Christian foreign missions. From the beginning the college’s purpose was to train ministers and teachers who would evangelize the world. Now nearing 125-years old and with the variety of academic programs greatly expanded, international service continues to be an important role for Union College alumni. To date approximately 10,405 students have graduated from Union College and more than 1200 golden cords have been hung. Among Union’s current students and recent alumni as many as two dozen student missionaries serve abroad during a typical school year and at least a dozen alumni are currently serving internationally under either the General Conference of Seventh-day Adventists or Adventist Frontier Missions, an independent supporting ministry of the denomination.

Each year Union College hangs golden cords on a device representing the college’s connection to the international community its alumni have served. The tradition began with a class gift in 1906, presented by class president Emil Rosenwold. The idea was the brainchild  of classmate John Peter Anderson and Professor Milton E. Kern and the first device was designed by college registrar, Mertie Wheeler. Anderson left for China soon after graduation and Rosenwold went to Sweden in 1913. Cords were hung for both men.

The original device designed by Miss Wheeler was a large world map with yellow strings (purchased from the local hardware store) stretched between the location of Union College and the various countries in which alumni were serving at the time. In 1906 no one imagined the Golden Cords would become a permanent symbol of Union College.

Devices through the years:1906 – World map with yellow strings

About 1910 – Mural paint on the chapel wall by art professor, Peter J. Rennings. 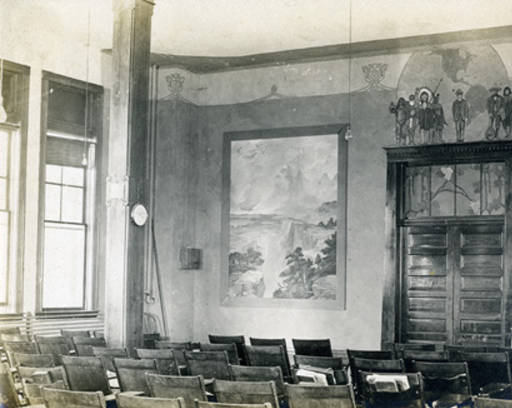 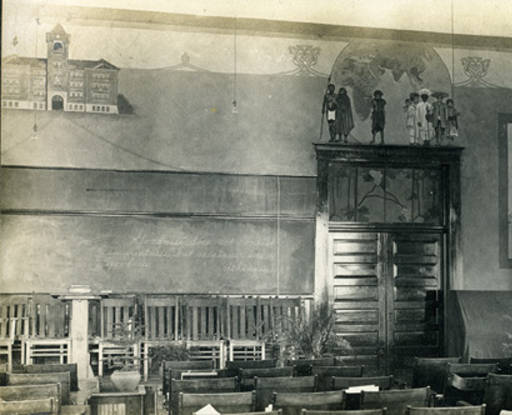 1914-1922 – Black and white framed photo of College Building flanked by two world hemispheres. Cords were tied to rings on the picture frame and each hemisphere. While the photo was used until 1936, the hemispheres were changed at least once. This framed photo currently hangs over the pump organ in the library’s Heritage Room.

1936 – Colored film mounted in a light box. The film was hand-tinted by art teacher, Chloe Sofsky. The hemispheres continued to be used. The lightbox with colored film is in the library’s Heritage Room collections.

1949 – Painting of old Clocktower with hemispheres mounted on either side. This painting hangs on the east wall of the library’s main reading room on the upper floor.

1975 – Rendition of the modern clocktower replaced the painting of the old clocktower.

1989 – Victor Issa sculpture currently in use.