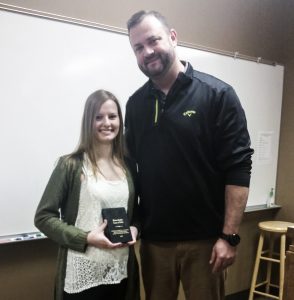 For Union PA student Kacie Moeller, the selfless service her grandfather, a World War II prisoner of war, inspires her as she trains for a career in medical service.

Moeller has been named the 2018 recipient of the Charles B. Keeling Selfless Service Award, a $500 cash award created by 2014 PA graduate Barrett Waldrep in honor of his grandfather, a Marine Corps veteran of the Korean and Vietnam Wars.

Captured along with 500 of his fellow soldiers by the German Army during the war, Arlan Moeller received a Purple Heart for injuries received in the line of duty along with several other metals and awards. “One word distinctly describes all military personnel besides those of courage, honor, and dignity, and that word is ‘selfless,’” said the younger Moeller in her application essay. “In a world full of selfishness and egoism, there is not a moment that goes by when our troops are not thinking about the best interest of each other and our country.”

Moeller strengthened her resolve to enter a medical career as she watched her grandfather’s struggle with Alzheimer’s disease. “He had a huge impact on my life and proved to me that anything is possible with a little hard work and perseverance,” said Moeller of the WWII vet who passed away 10 years ago. “Even facing the possibility of never seeing his family again while a prisoner of war, he continued to stay positive and have hope. He always enjoyed helping others, and I hope that as PA I can treat my patients the way he treated people.”

To qualify for the Keeling Award, first-year PA students who have served in the military, law enforcement, as a firefighter, a first responder, or have family who have done so, must submit a paper to the Keeling Award Foundation. The foundation, made up of Waldrep and a few family and friends, determines the award winner based on the applicant’s discussion about their lives, what service means to them, and how they plan to serve now and as a physician assistant.

“He was the epitome of hard work,” said Waldrep of his grandfather. For Waldrep, who served as a combat medic in the U.S. Army, the Keeling award is a way to give back. “I want my life’s work to be a tribute to God and those who have influenced me in my spiritual, academic and medical ventures,” he said.