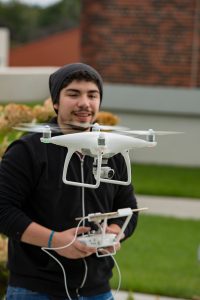 College graduates are always looking for résumé builders—experiences that help them get noticed by employers. For Colton Baker, a class in drone piloting has already helped position him for his dream career in international development.

“We flew the drone to collect data on crop height so we could build 3D computer models,” said Baker, a senior international rescue and relief (IRR) major. “I have already placed the experience and license on my résumé, and it has helped me gain attention for having valuable additional skills.”

When engineering and computer science professor Dr. Seth McNeill was approached by an alumnus who needed drone pilots to create 3D models of fields over the summer, he jumped at the chance to retool one of his robotics classes to train pilots. Before coming to Union, McNeill worked as a drone researcher at the University of Nebraska. With help from his former colleagues at the drone journalism lab, he developed the curriculum for the new class.

The first half focused on passing the FAA drone pilot exam—a comprehensive written test required for all commercial drone pilots—and the second half was spent on data collection and examination. McNeill believed the students should understand how to read the data collected by their drones, not just pilot them.

“As an engineering professor, it was fun for me to watch students learn that math is important,” said McNeill. They were hired to analyze 160 acre fields, and their drones were only capable of covering 40 acres per flight. “To get the right coverage when taking pictures of fields requires a lot of math. Ideally, you’ll have an app to do the calculations, but you need to understand what it is doing.”

Union worked with SaraniaSat, a small aircraft/satellite agricultural remote-sensing company developing novel solutions for problems of global import. SaraniaSat donated the drones used for the project and sponsored the class. “Large agricultural companies such as DowDuPont and Monsanto in the U.S. and Bayer, Syngenta and BASF in the EU are also working on these problems and are eager to cooperate on solving them ,” said McNeill. “We also worked in collaboration with Aaron Schepers of Cornerstone Mapping, Inc.here in Roca, Neb.”

Baker, along with two other students, were hired by the sponsoring company to collect data over the summer. And according to McNeill, this is only one area where drone pilot expertise is valuable.

“The drone market is blossoming now that it is legal to fly commercially and there are many new markets opening up.” he said. Some of the students in his class were hired immediately as aerial photographers for Union College or at summer camps. “Drones are also being used in many other fields such as search and rescue and in real estate advertising.”

Baker had another unique opportunity to apply his experience when he traveled to Port Arthur, Texas, with the team of his fellow international rescue and relief majors to aid in the cleanup from Hurricane Harvey (see page 16).

“I collected data on damage by recording before and after footage of waste piles in front of the houses,” he explained.

In the future, McNeill plans to find a variety of ways to make the class viable. “Our sponsor most likely won’t need this data collection again next year,” he said. He hopes to partner with the video and photographic arts program to offer a course to help students become skilled in drone photography as well as data collection.

For now, students who took the course are putting their skills to use. “This experience is really going to help me in the future,” said Baker. “I know it’s going to stand out on job applications and set me apart from other applicants.”